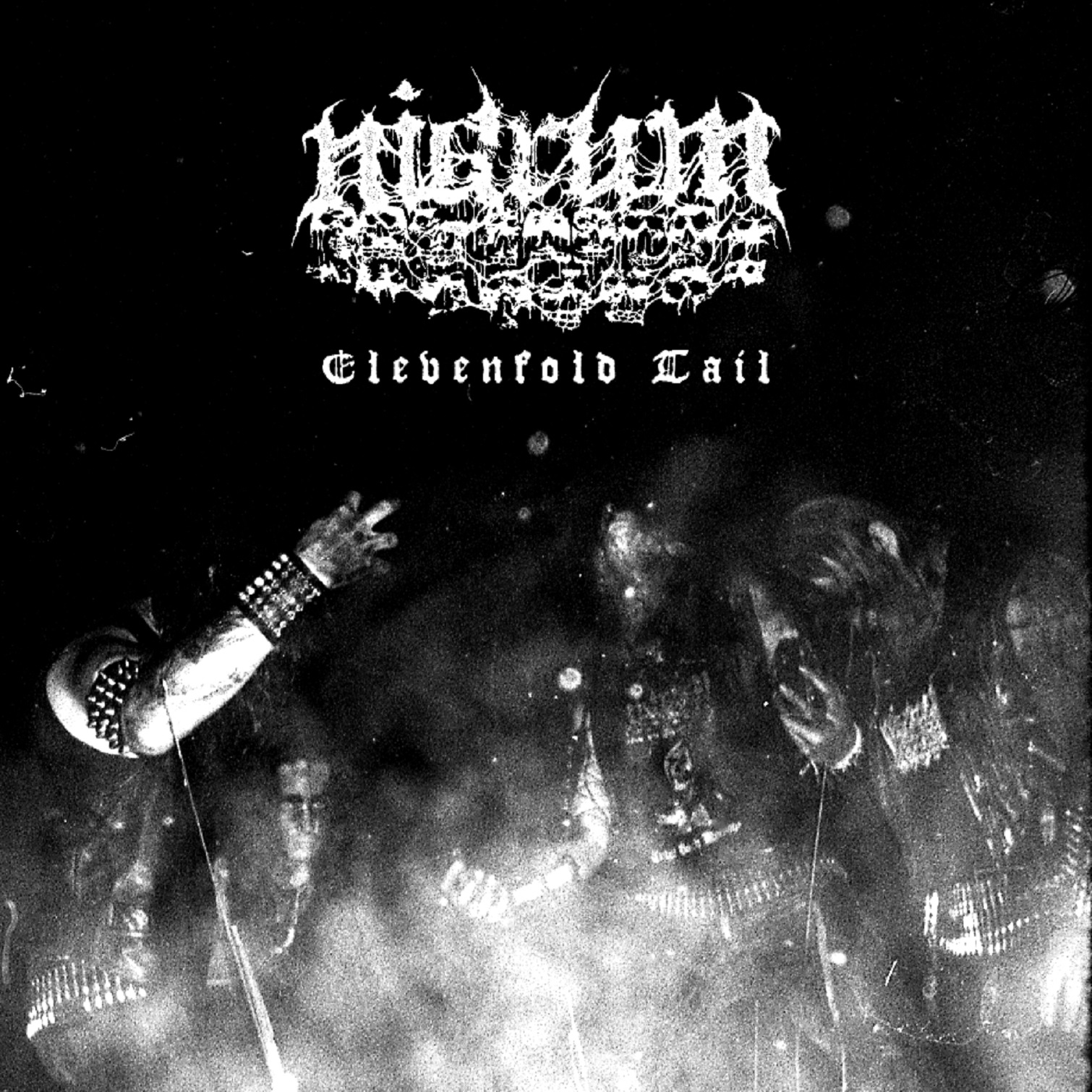 Listen to the first track “Per Sepulchra Regionum” here: https://youtu.be/bk90MyWBXRU

“In 2015, NIGRUM was born from fire, from snake-infested tunnels and ravenous worship of death – there, where ancient stones are inspirited by bone-breaking and incessant ecstatic dances. From the mists of the central Mexican highlands and the pyramid temples of Quetzalcoatl that lie there came a turbid and sinuous path that took shape in the form of black metal.

After the first years of this journey, marked by hard strife and constant changes, the cutting obsidian breeze of the Serpent brought NIGRUM to Scandinavian shores. After laying the past to rest, a new gathering of members was established in the south of Sweden. It was consecrated by the recording of a three-track demo named Cremer Igne, translated from Latin to “The Undying Fires.” It was recorded by the band in early 2020 and released later that same year by Tour de Garde. As that year was turning to an end, the band had its first live appearances in Sweden, Denmark, and Germany in its shifted shape after years of silence.

The spiritual and creative processes that guided NIGRUM culminated, and were crowned, by the recording of their debut album. Titled Elevenfold Tail, NIGRUM’s first full-length strike is a serpentine one: clear and cutting in its cunning, but given to hideous energies that always threaten to bubble over into hysteria. NIGRUM’s black metal here simultaneously sounds vintage and modern, with foundation stones faint – both North and South reside on their compass – and no trendiness pursued for cheap absorption. Rather, Elevenfold Tail unlocks its secrets slowly, subtly, almost sensually…although, again, that elemental fire is always burning and always threatening to consume the listener. As such, NIGRUM’s songwriting and execution both put a premium on delayed-gratification dynamics; aura and atmosphere likewise exist in (dis)harmony with that songwriting and execution, coalescing into a cob-webbed, bug-eyed album-length experience. The ritual dagger flashes, and seals your fate…” 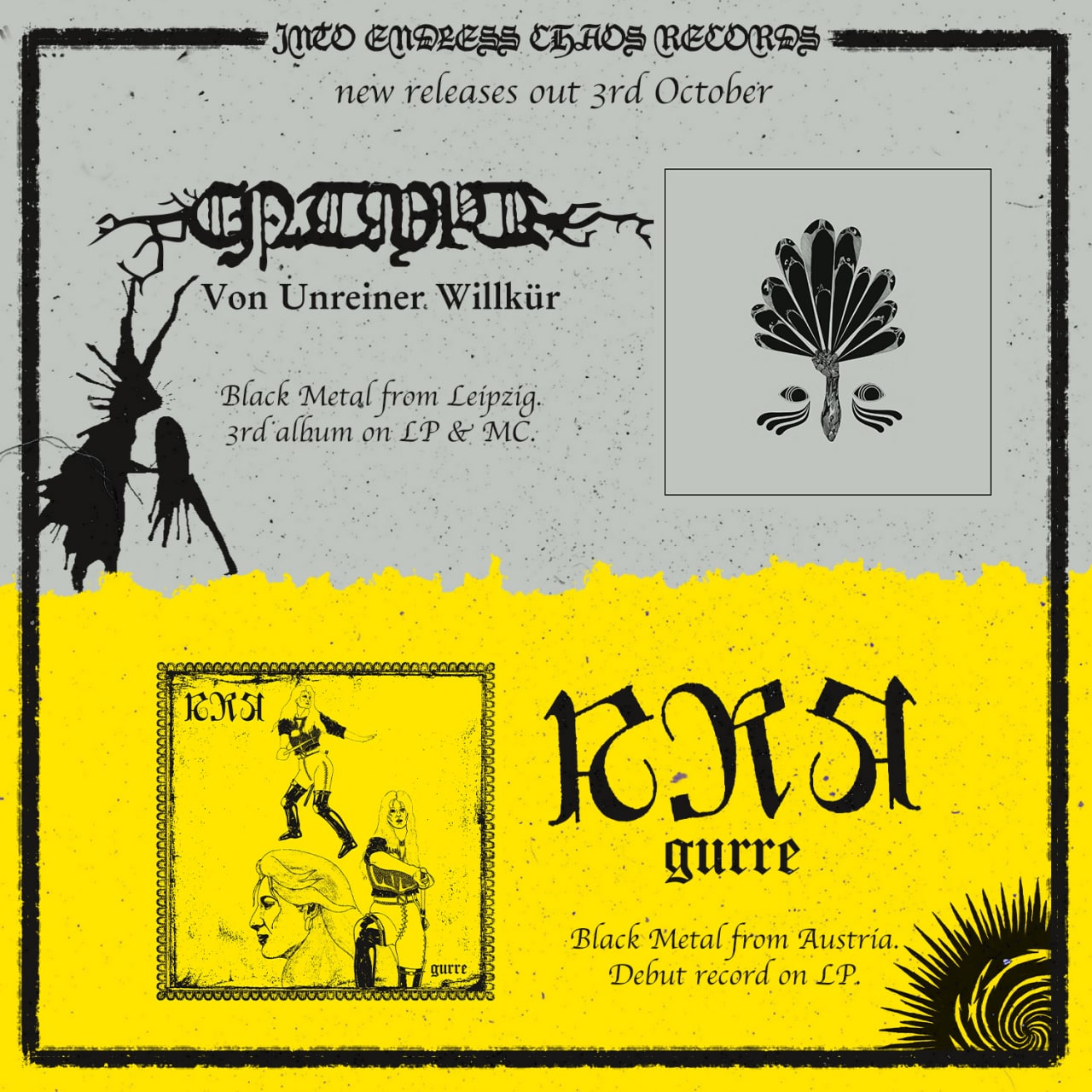 Listen to the full record via https://cntmpt-iec.bandcamp.com/

Listen to the full record via https://ara-iec.bandcamp.com/ 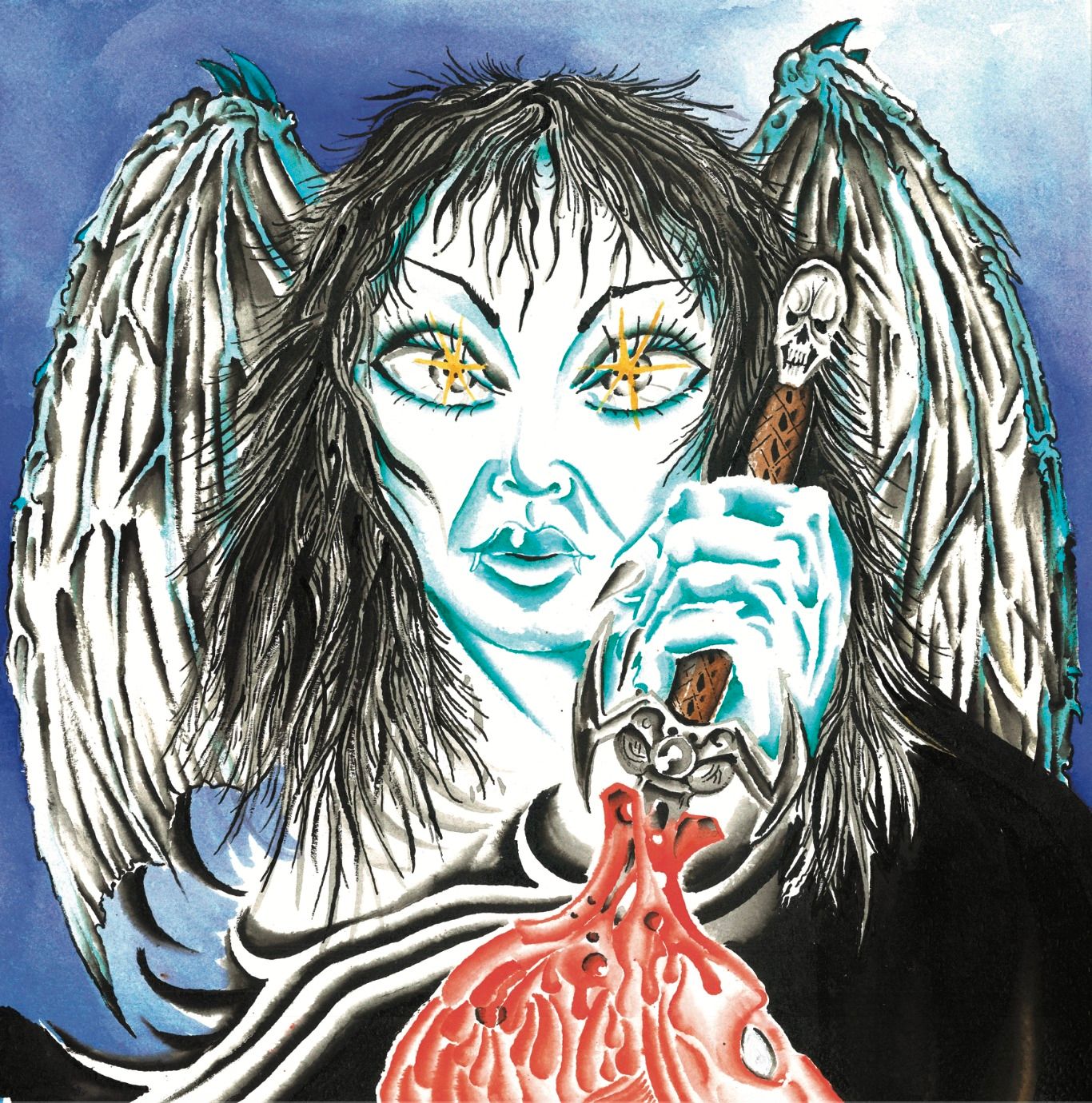 Only 50 copies of the colored version & 100 of the black version left, so act fast if you want to grab one!

“Both worshippers and pervertors of ancient quede witchery and vivid visions of horror unite for predictably fitting twofold orations, drenched in viole(n)t streams of light – Austria’s HAGZISSA and infamous HEXENBRETT consecrated their insalubrious workings to the odd and hidden, to the night and blood and to mock the gates that separate the here from the beyond. It was purley inevitable for this to happen. Shun yourself in laughter of lunacy or just stay away. We are serious.” 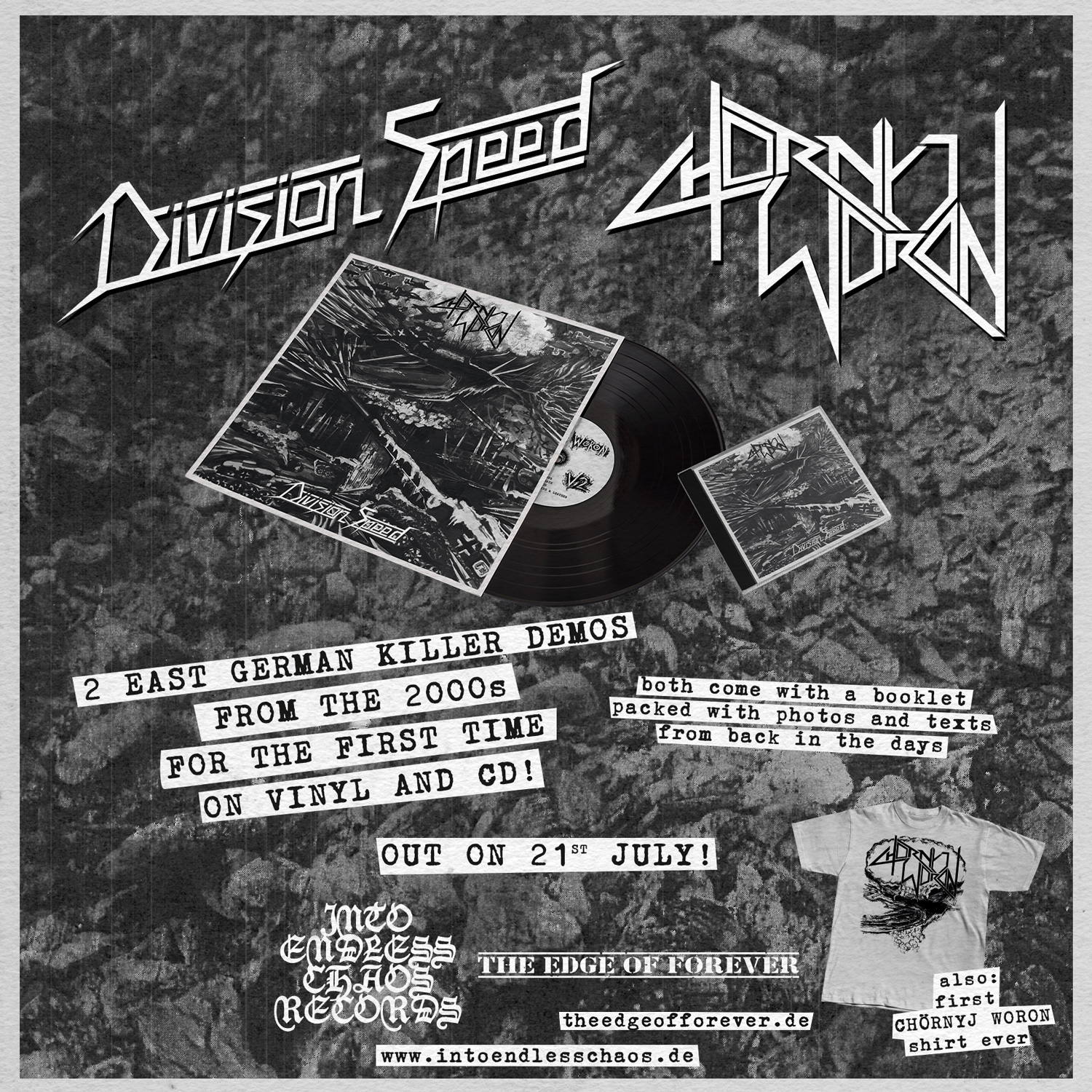 Two East German killer demos from the 2000s for the first time on Vinyl and CD – we’re proud to finally present you the long awaited Division Speed / Chörnyj Woron Split release. Both include a booklet packed with tons of photos and other relics from back in the days. 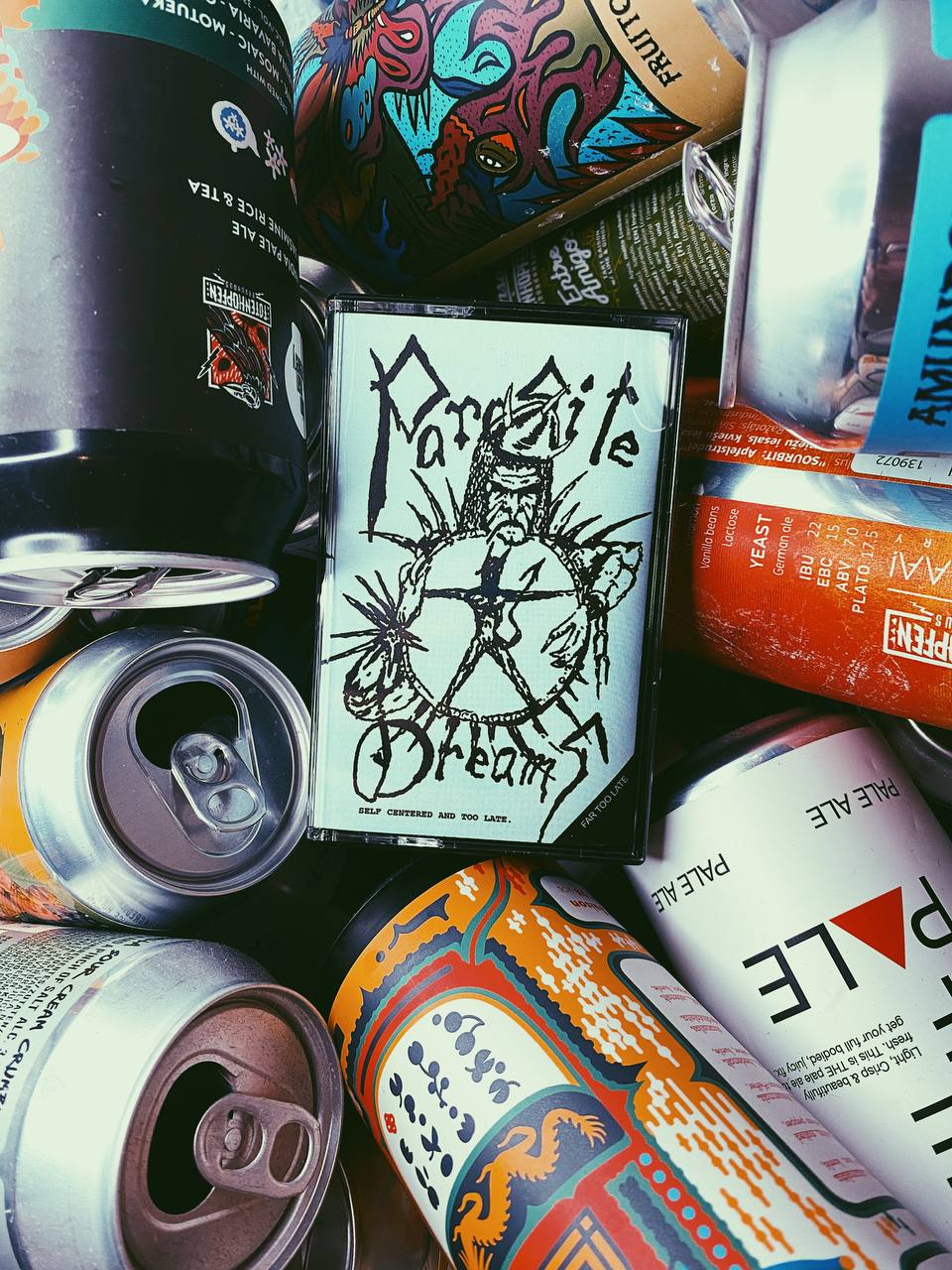 A message bold and stinky just as rotting raw meat in the concrete sun, but Vienna based PARASITE DREAMS is hands down one of the truest black metal punk piece one may currently find in the dystopian trenches.

Driven on hatred towards bleak post-capitalist total up-fuck and by a severe hommage towards deranged chaos mongerism, this latest output is something you should check out either way, useless loserfuck.

Listen to “Spike Sperpent” by Parasite Dreams on YouTube: https://youtu.be/0RnXmdGKx1I

Hagzissa/Hexenbrett Split LP is postponed to early August, but you can already place your PRE ORDER.

Both worshippers and pervertors of ancient quede witchery and vivid visions of horror unite for predictably fitting twofold orations, drenched in viole(n)t streams of light – Austria’s HAGZISSA and infamous HEXENBRETT consecrated their insalubrious workings to the odd and hidden, to the night and blood and to mock the gates that separate the here from the beyond. It was purley inevitable for this to happen. Shun yourself in laughter of lunacy or just stay away. We are serious. 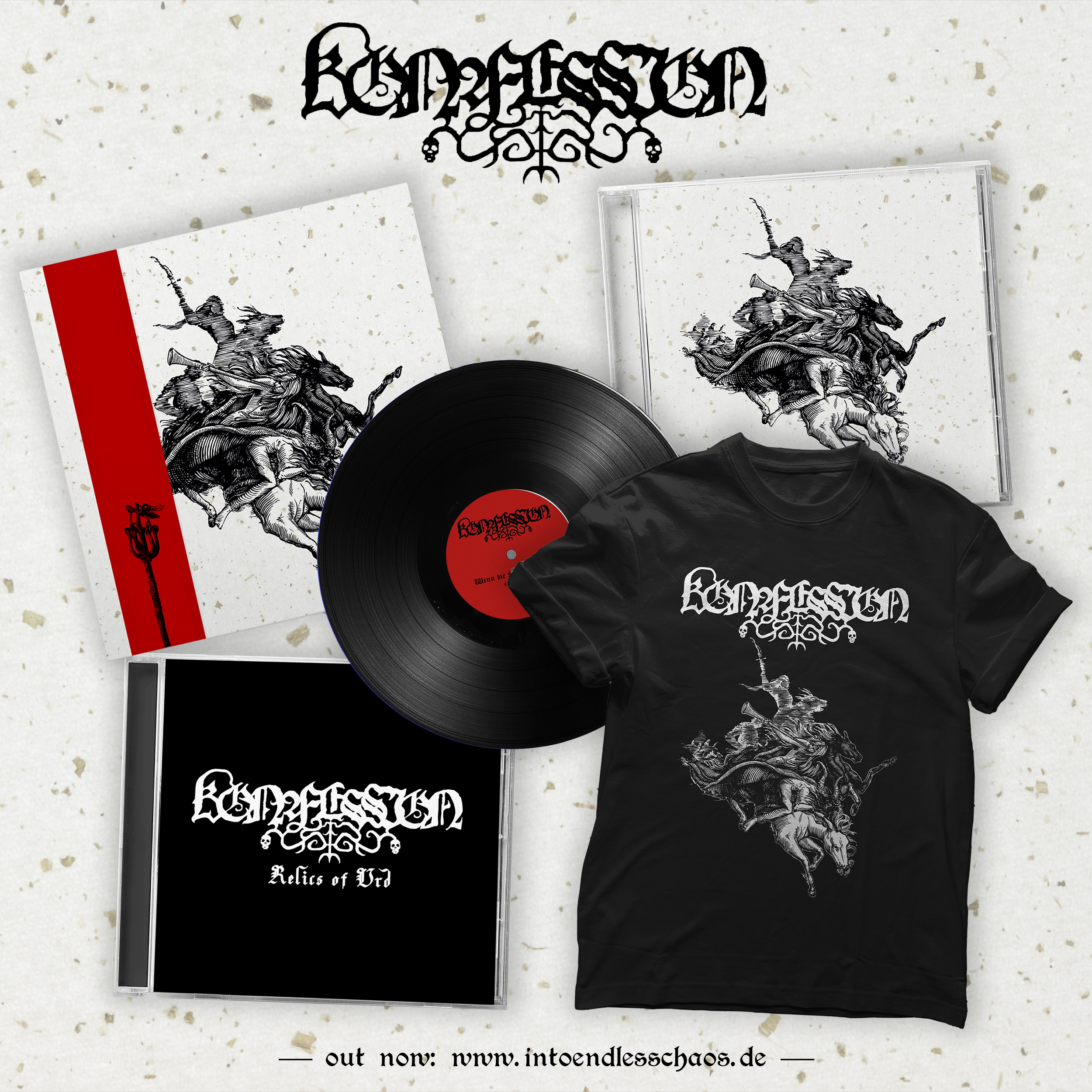 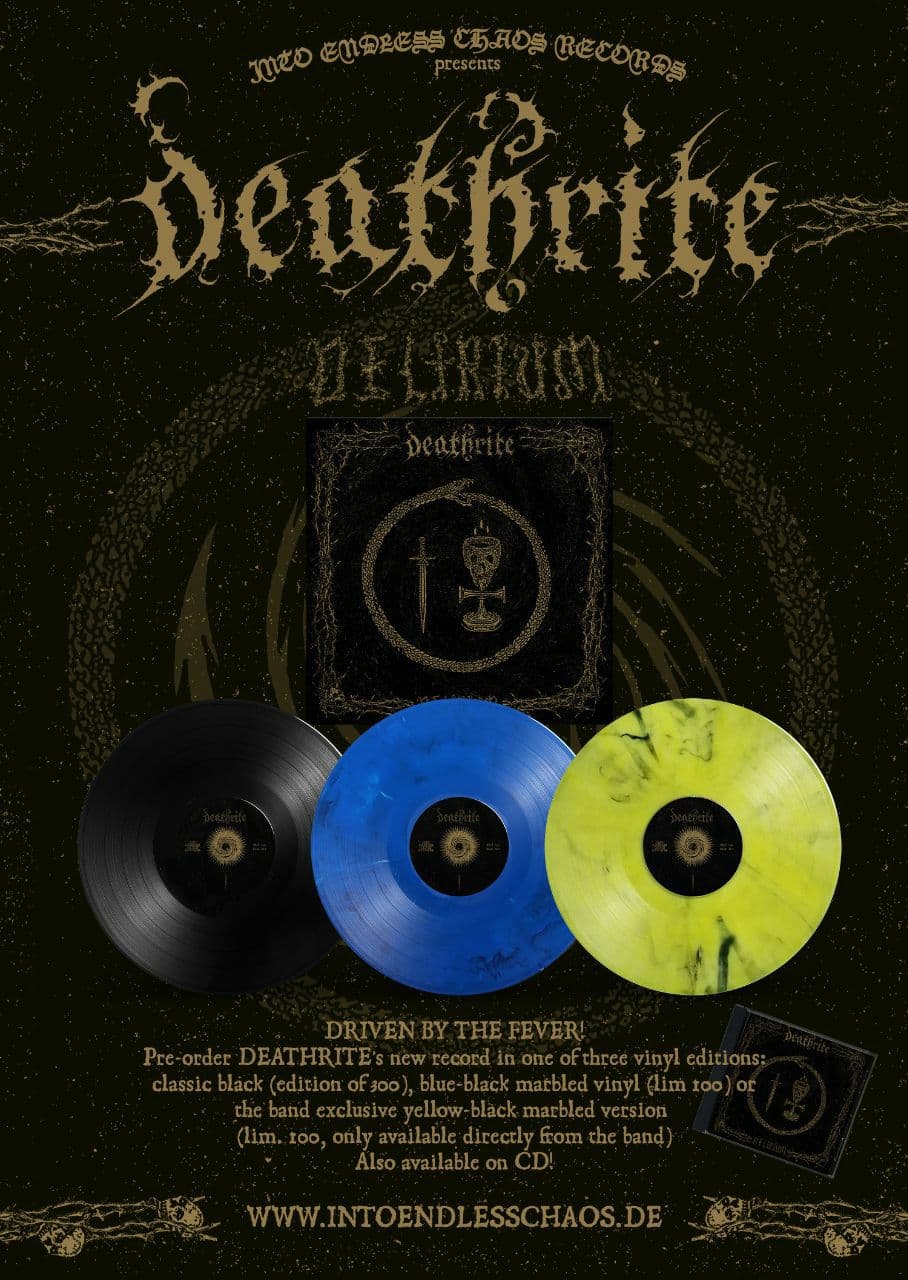 “Driven by the fever”, Deathrite are constantly creating new music, pushing the boundaries of Metal and Punk. Whether it’s Black, Death or Noise, in over a decade the five piece from Leipzig, Germany have forged their unique musical language. “Delirium” is setting the stage once more, exposing its visceral view at a bad trip to the deepest depths of your vicious desires. Wounded, addicted and violated… 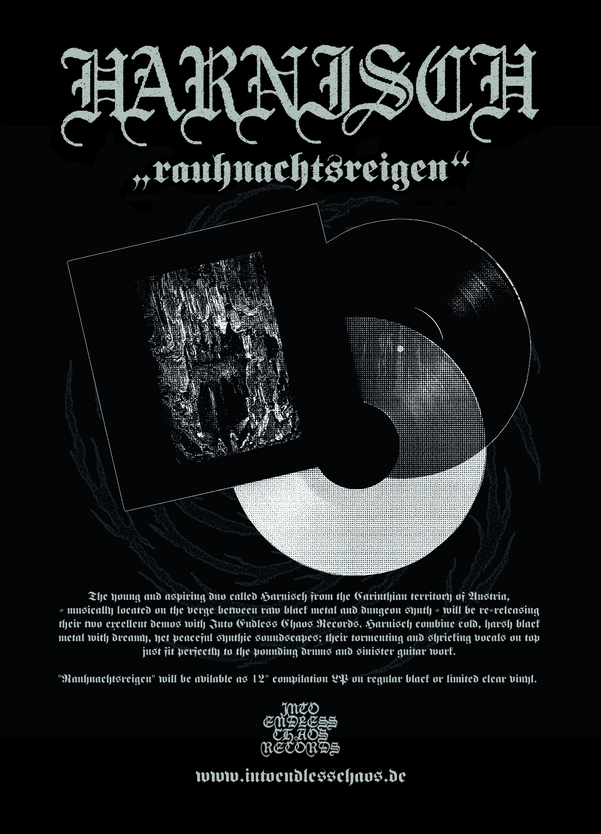 The HARNISCH records arrived here yesterday and we must say that these turned out pretty nice! First orders are already on the way…

“Rauhnachtsreigen” is avilable as 12″ compilation LP on regular black or limited clear vinyl.