In 2015, NIGRUM was born from fire, from snake-infested tunnels and ravenous worship of death – there, where ancient stones are inspirited by bone-breaking and incessant ecstatic dances. From the mists of the central Mexican highlands and the pyramid temples of Quetzalcoatl that lie there came a turbid and sinuous path that took shape in the form of black metal.

After the first years of this journey, marked by hard strife and constant changes, the cutting obsidian breeze of the Serpent brought NIGRUM to Scandinavian shores. After laying the past to rest, a new gathering of members was established in the south of Sweden. It was consecrated by the recording of a three-track demo named Cremer Igne, translated from Latin to “The Undying Fires.” It was recorded by the band in early 2020 and released later that same year by Tour de Garde. As that year was turning to an end, the band had its first live appearances in Sweden, Denmark, and Germany in its shifted shape after years of silence.

The spiritual and creative processes that guided NIGRUM culminated, and were crowned, by the recording of their debut album. Titled Elevenfold Tail, NIGRUM’s first full-length strike is a serpentine one: clear and cutting in its cunning, but given to hideous energies that always threaten to bubble over into hysteria. NIGRUM’s black metal here simultaneously sounds vintage and modern, with foundation stones faint – both North and South reside on their compass – and no trendiness pursued for cheap absorption. Rather, Elevenfold Tail unlocks its secrets slowly, subtly, almost sensually…although, again, that elemental fire is always burning and always threatening to consume the listener. As such, NIGRUM’s songwriting and execution both put a premium on delayed-gratification dynamics; aura and atmosphere likewise exist in (dis)harmony with that songwriting and execution, coalescing into a cob-webbed, bug-eyed album-length experience. The ritual dagger flashes, and seals your fate… 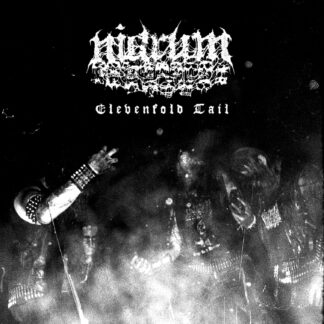