THE VOICE OF THE DARK by Albertus Jimenez BOOK

The complete early writings from the occult writer hailing from Mexico. The figure who participated in numerous fanzines with his infamous occult section now publishes his book for the first time with all those writings restored. In this book you will find the complete writings from The Voice of the Dark, Non Serviam I, Non Serviam II plus many extras.

The Voice of the Dark was active from 1988 to 1993 and this is a compilation of all those articles which were printed inside the pages of the now legendary fanzines from the past like: Stregoica (Fra), Daemonium Aeturnus (NL), Holocaust (Pol), Orcustus (Nor), Hellspawn (Fin), Blasphemous (Gre), Codein (Ger), Black Vomit (CR), Key of Alocer (NZ), etc., plus many other articles that had never been printed before.

NON SERVIAM magazine began right after Albertus Vorkt started quitting from the Black Metal scene, and also because he was highly influenced by Pagan/Occult/Satanic publications from those days like Dark Lily (UK), The Heretic (NZ), The Lamp of Thoth (UK), Trident Magazine (USA), The Black Flame (USA), Fenrir (UK), Balder (UK) and the booklets printed by Order of the Evil Eye (USA) and The Order of the Left Hand Path/Ordo Sinistra Vivendi (NZ).

NON SERVIAM 1 was a publication un-linked to Metal, but bonded to Antichristianity instead. This issue of hatred towards christianity and the “holy” bible has been reworked and blasphemously decorated with mocking illustrations done by veteran artist Carl Alessi, (an enthusiastic collaborator to Vorkt’s current main creation Widdershins ‘zine), specially for this reprint.

The second issue of NON SERVIAM focused on the morbid and the occult. The title of this issue was “The Holy Ghost Fall” which is written on the cover by using the characters of the Theban Alphabet according to a plate found in one issue of Heretic Wisdom magazine (USA). It was published in 1994, and then revised and re-printed in 1996.
For that second issue of NON SERVIAM a collaboration also took place with Brazilian Black Metal singer Lullaby who in that same year had penned and printed her own booklet called “666 LULLABY.”

The translation of The Voice of the Dark section title was done back in the old days into twelve different languages with help from people from bands like Moonspell, Mastomah, Xantotol, Necromantia, Bestial Summoning, Emperor, Barathrum, etc.

The “Vox Tenebrarum” logo was done by Barathrum’s singer and frontman Demonos Sova who also had the idea of publishing his own magazine called SaLuBeLe back in the days. 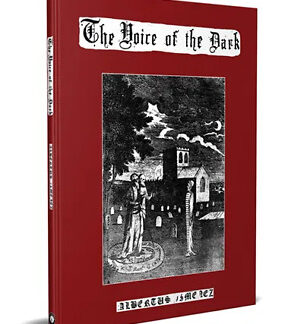 You're viewing: THE VOICE OF THE DARK by Albertus Jimenez BOOK 25,00 € incl. VAT
Add to basket