The first full-length black metal onslaught of Chilean Black Metal project Aarkanne, Mysterii, which followed the release of the debut Aarkanne demo entitled ‘De Profundis’ which was unveiled in November, 2020. Mysterii is a testament to the agonizing punishment of raw black metal with deathlike structures that enforce a flurry of distorted chaos. Six tracks of this thunderous South-American raw black metal carnage that are consistently punishing, Aarkanne delivers these strong waves of melodic plague in this LP. Pure hatred and disgust captured into six tracks of destructive raw black metal that stands for ultimate torment to the depraved.

Aarkanne strikes with this full length opus that brings the journey of this alchemical entity through red visions of ancient monoliths hidden from human eye, a call to return and worship old darkness in its purest form. In 32 minutes, Aarkanne’s essence emerges to disintegrate the rotten bodies of those who, in total devotion, follow the sinister path under the dim light of a mournful and pale full moon. Enter into the labyrinth! Channelized through rituals and howls at dawn’s fire, recorded somewhere in south Chile in a clandestine way, Mysterii is the first of a continuation of events that will surround Aarkanne’s work. 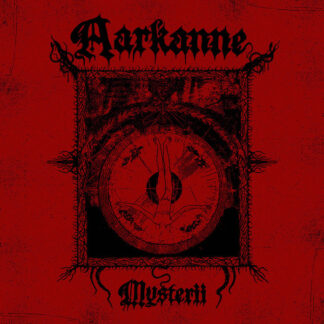